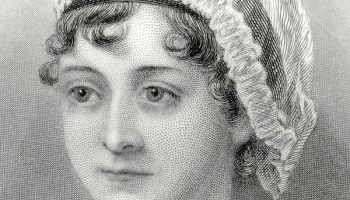 I’ve been writing this post for about two hours now. In between shoving washing in the machine and then the tumble dryer, and walking the dog, it’s taken me far longer than it should, which is really frustrating as Austen is one of my favourite topics to talk about.

On 18 July it will be 200 years since Austen’s death and yet she is still one of the bestselling authors of all time. Her novels still touch the hearts of people all around the world every single day.

So many articles are written about Austen from avid fans like me, to academics and scholars, that I’m not going to bother trying to be too clever, or factual. I’d only be rehashing stuff from what will always be a more in-depth study than I can manage here in this short blog post. But, I am going to outline my two personal reasons why Jane Austen was such an interesting character for me.

She loved her daddy!

Jane’s father brought her a writing desk for her 19th birthday. Not only does this show a remarkable understanding of his daughter’s love of writing, but also of the bond between father and daughter. In an age when women weren’t allowed to have careers and the only real expectation for them was to secure a respectable husband, it’s wonderful to read that George, her father, wanted something more for his daughter and was encouraging of her talent. Well done, George, we’re all so glad you did! You can read more about this in this article in The Guardian.

She stayed near me!

Jane came to stay with her brother, Edward, at Goodnestone Park in Kent, which is very near to where I live. If you’re a Jane Austen fan, do come and visit. The house and gardens are beautiful and it’s amazing to walk in Jane’s footsteps. Just walking around the grounds knowing that this is where Jane would have been, is the most amazing feeling. And, in my opinion, the best thing about Goodnestone Park is that it was shortly after returning from here that she began writing Pride and Prejudice in 1796. It makes you wonder what happened during that visit, doesn’t it?

So there you go! I could have discussed how she’s influenced my writing, how we all strive to be as lyrical and elegant in our prose as she is, but it’s all been said a thousand times before and by much better writers than me! But, if you want more Jane facts like the two random ones above, then I’d definitely recommend reading the amazing Dr. Lucy Worsley’s book, Jane Austen at Home, or Claire Tomalin’s Jane Austen, A Life. Both are wonderfully insightful, well written and by the time you come to the end, you’ll feel that you’ve really got to know Jane.

Get in touch and let me know what’s your favourite Jane Austen fact? Favourite novel or character? Or what have you learned from Austen about love, life or writing? I’d really love to know how Austen has touched the hearts of you guys out there, just like she’s touched mine.