Today I’m welcoming the fabulous Ruth Leigh to the blog talking about her writer’s journey!

I learned to read aged five. I can still recall the exact moment when, gazing at a large picture book detailing Little Red Riding Hood’s adventures, the various black squiggles and dots rearranged themselves and became recognisable words. It was a big moment. Books were destined to play a key part in my life and fifty years later, nearly halfway through my first year as a full time writer, they still do.

Except these days I write them.

The seeds of writing were sown in my childhood. I was largely solitary, spent a lot of time escaping from life via any book I could get my hands on and had a vivid imagination. Making up stories was very much my thing and I can still remember the first one I ever wrote, aged six. Lovely Mrs Camus, the Class 3 teacher, asked us to make something up so I wrote the following words:

‘My aunt came round. We went out.”

I accompanied it with a picture of a lady wearing a pink dress, accomplished by blending red and white crayon, resulting in a pleasing roseate shade. I handed it in and waited to be told off. It had been impressed on me that lying was very wrong and what I had written was a lie. My aunt had not come round. Due to an exciting family feud, I had never met her. And we rarely went out.

Mrs Camus was very pleased indeed. I got a gold star and that was the first time that I realised you could make up a story and be praised for it.

From then on, every time someone asked me what I wanted to be when I grew up, I would answer: “I’m going to be a writer.” Stephen King’s excellent advice is something I often advise people starting out in the business to take.

“If you want to be a writer, you must do two things above all others: read a lot and write a lot.”

I often share writing tips on my TikTok page and they’re a blend of extracts from great books I’ve read (such as Stephen King “On Writing”) which I would recommend very highly, along with life experience.

Without ever having heard of Mr King, I took 50% of his advice and read voraciously, widely, passionately. I’m naturally a very fast reader and I would exhaust the primary classroom library (a pile of age-appropriate volumes piled up on the windowsill) before the first term had caught its breath.

I didn’t realise that I suffer from rampant abibliophobia (the fear of running out of reading material) and this led to a lifelong addiction toth books. At eight, bored with my current selection, I slid the glass door back on my parents’ bookcase in the front room and took out a small book bound in royal blue with gold engraving by a person called Charles Dickens. I’d never heard of him, but as a chronic abibliophobic, I needed my fix and I was willing to give this David Copperfield chap a shot.

Naturally, a lot of it went over my head (the same applied to Oliver Twist, my next venture into nineteenth century literature). Some of it really hit the spot though – the little boy living happily with his mother and nurse, the evil brother and sister ripping their life apart, the scenes in Yarmouth with the Peggottys, David’s budding romance with Dora. It all sank in and years later, when I was doing my degree at Birkbeck, I specialised in the nineteenth century novel, Dickens included.

I gave up on my dream of being a writer when I left primary school and waded into the shark-infested waters of high school and adolescence. I always say that life is copy and even when I was living through some difficult times, I carried on reading everything I could lay my hands on, unconsciously storing up material for my later career as a fiction writer.

Part of my dream came true fifteen years ago when I started my freelance writing career. I loved it and worked hard to develop it. By March 2020, I had an extensive portfolio and was thinking about starting a waiting list as I was so busy. Along came lockdown and 75% of my work vanished overnight.

Fortunately for me, I blog for a national organisation (the Association of Christian Writers) and in April 2020 I wrote a funny piece about a terribly successful and rather annoying lifestyle blogger called Isabella M Smugge (as in Bruges). Her name spells out “I Am Smug” and she was only ever meant to be a joke.

The blog was well-received and in May I wrote another piece, more serious this time, about the impact social media can have upon us. I chucked in Isabella again. To my utter amazement, that afternoon I was contacted by a literary agent who told me that he thought Isabella would make a good novel and would I like to write a couple of sample chapters and a story arc and send it over. He was happy to represent me and pitch my work to publishers. Once I had been brought around from my swoon, I betook myself to the dining room, opened my laptop and started writing.

Having never written fiction before, I expected it to be a hard slog. However, all the books I’d absorbed for the last fifty years had been distilled into a giant header tank at the back of my brain and the words poured out. I found that my snobby, rich, entitled joke character was a superficially perfect woman with a sad back story and lots going on in her life. Writing her and creating her world was the most wonderful experience and when my agent got in touch to say that the fifth publisher he’d pitched to was prepared to take a chance on me, I thought I would explode with excitement.

Finally, fifty years after those black squiggles and dots began to make sense, I am a full time writer.

And I have to tell you, it feels pretty good.

You can find out more about me at my website: www.ruthleighwrites.co.uk, follow me on Facebook, Instagram, Twitter and TikTok at @ruthleighwrites and buy my books directly from me on my online shop or from Amazon, Waterstones, Eden and wherever good books are sold. 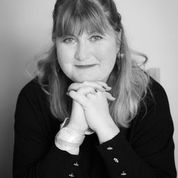 Ruth is a novelist and freelance writer. She is married with three children, one husband, assorted poultry and a kitten. She is the author of “The Diary of Isabella M Smugge” and “The Trials of Isabella M Smugge”. She writes for a number of small businesses and charities, reviews books for Reading Between the Lines and blogs at ruthleighwrites.co.uk. Ruth has abnormally narrow sinuses and a morbid fear of raw tomatoes, but has decided not to let this get in the way of a meaningful life. You can find her on Instagram, Facebook and Twitter at ruthleighwrites and at her website, www.ruthleighwrites.co.uk.

Thanks so much for joining us, Ruth! Make sure you all head over to Amazon to find her fabulous books!