This wass I’m so excited to welcome the lovely, funny and amazing Evie Alexander to the blog!

How an Idea For a Story Became a Four Book Series

When I came up with the idea for Highland Games, I had no intention of it being the start of an entire series. The story of a woman moving to Scotland to live in a dilapidated cabin was inspired by my friend Zoe, who built her own off-grid cabin from the ground up. Hers was built of wood and cob (a mix of mud and straw) and had a Rayburn stove inside for warmth and cooking. She often has chickens running around inside and I loved the concept of a city girl moving into the wilds and finding adventure and love. 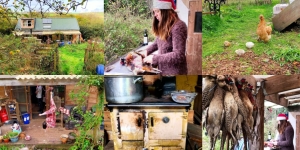 I’d been playing around with the first few thousand words of my unnamed ‘Scottish novel’ on and off over a couple of years, but it was only after another friend became my accountability partner that things started moving properly. She told me to write for half an hour every day and then send her what I’d written. I started in June 2019 and by the end of October had somehow written nearly two hundred thousand words and developed an adrenal disorder through lack of sleep…

The average length of a romance novel is between 65 and 85 thousand words so I soon realised that if this story was going to work in the marketplace, it needed to be split in half. Easier said than done… By now the manuscript had been read by several beta readers and I also had an editor and we spent months trying to find a satisfactory conclusion to the first story and making the second half long enough. This process took the best part of two years and involved cutting nearly fifty thousand words, writing forty thousand more, and dramatically changing the story. It was utterly exhausting and each time I felt like we’d reached the finish line, it promptly disappeared over the horizon…

One issue that was flagged up by my editorial team was that in the second half of the story there were also two other love stories. My editor said that these should be stripped out and only briefly alluded to. This then gave scope for another two books, turning my original one (stupidly overlong story) into a four book series. That sounded like a great idea until I tried to write two other books which took place at the same time, in the same location, and with the same characters as book two… It was another hard lesson to learn and not one I will ever be repeating.

So, as the edits continued on the first two books, and I began writing book three and four, the next bridge I had to cross concerned what on earth the books would be called and what the covers would be like. The titles were all thanks to advice from a Facebook group and Katie herself must take credit for the title of book three – Kissing Games! In terms of the covers, I wanted illustrated covers that conveyed the cheeky nature of the books. My designer sketched out a concept, and over a period of months we tweaked it. Here’s the original sketch, the first mock-up and the final design. 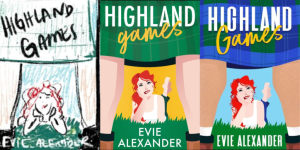 Once we had the cover of Highland Games it was time to finalise a date for publication and plan the launch. It’s the most nerve-wracking thing to bring a new book out into the world and on publication day one of my assistants rang to say that in the ‘look inside’ feature on Amazon, there was an extremely old draft, not the new version we had uploaded. The stress was unreal and there were multiple other hiccups that occurred. It was like being on a perpetual rollercoaster, with every massive high being followed by a desperate low.

The good news though was that Highland Games was very well received and I already had the next three books written so all I had to do with them was get them edited and the covers designed. To date, Highland Games and Hollywood Games are out. Kissing Games releases in September 2022 and Musical Games, the final book in the series, is coming out January 2023. It’s been a wild ride but a whole lot of fun and I’ve loved bringing these characters and their stories into people’s worlds!

If you fancy dipping your toes into Highland Games, newsletter subscribers get the first few chapters for free, as well as twenty thousand words of saucy scenes that got cut during the editing process! 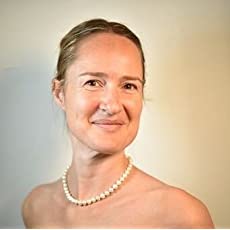 And connect with Evie via the links below:

Thank you so much Evie for coming over and chatting to us about your amazing series! I’ve got the first one on my Kindle and I’ll be bumping it up my TBR list now!