Working with HQDigital UK means I am lucky enough to have met a huge number of talented authors. And one of them is joining me today! The amazing Christopher Byford, author of the Den of Shadows series!

Hi Christopher, tell me a bit about you and your latest work.

We’ve got the Den of Shadows Collection being released in December 2018. This is a collection of all three of the Amazon bestselling Den series titles, along with some sparkly new material shoved in there. The Den series revolves around the crew of a flamboyant show train as it brings joy to the downtrodden in a desolate region known as the Sand Sea. Its owner, Franco Del Monaire is struggling to keep things together; the lawmen are suspicious of its activities and the lawless want to claim it as their own. In the course of the series a great tragedy results in a copycat vehicle picking up the role years later, only for its owner to become indebted to a crook called Jackdaw. The last in the series focuses on Jackdaw as, in a desperate attempt to pay back money he owes, drags those aboard the copycat train into a daring heist. I’m excited to see them all together in one package. On top of that, we’ll be releasing Luck and Other Deadly Things which is a Den series companion novel for free in January 2019. This will contain cut chapters, a bit like the deleted scenes button on a movie menu. We wanted to do something a little different as a thank you to those who followed the series to its conclusion.

Firstly, write. Stop the procrastination and the worrying and just start bashing away. Second would be understanding that everyone’s process is completely different and that some authors hammer out five thousand words a day and some only a few hundred. There is no right or wrong way, just got at your own pace. Lastly, learn to let go. Don’t do a George Lucas and attempt to repeatedly repair things that don’t need repairing. Oh, and for everyone who loves your book, there will be someone who utterly hates it. Be at peace with that.

Both. I have a pretty detailed layout as to how I want things to go but almost inevitably the characters and events began to dictate themselves. I’m just along for the ride at that point, just like everybody else.

The polite answer would be for a single person to find enjoyment in what I’ve written. The real answer is being the owner of a Scrooge McDuck-esq money bin.

They’re honestly concocted on the fly. I rarely put deep thought into a name as I found ‘pushing’ a specific name can make it seem out of place. I tend to use placeholder names at times and more often than not they become permanent. For example, one of my main female characters is named Misu. I had one eye on the Japanese news channel NHK which was running a documentary about miso soup of all things and the rest is history.

Not since that disastrous hostage situation.

Half the time I just move to something else in the manuscript. The other times I step away from it and focus on something non-book related. I have a theory that the subconscious mind bashes through problems when your attention is put elsewhere. Then, when I sit back down things tend to race to a resolution.

It varies but I would say 6-8 months for an average sized title.

I have a terrible habit of head hopping. I’m trying to consciously curb it but it can be tricky restraining what I want to communicate in relation to what could feasibly be shown in a scene due to the point of view.

Most of the time I find dialogue the easiest. When I’m in touch with a character it just flows. There’s an old writing technique I use that I picked up at some point. It states: imagine you and your character are at a bar and you offer to buy them a drink. What would they drink? What would they say? It also means that you spend some time talking yourself like a complete lunatic but the end result is more natural. The hardest would be the head hopping thing. I’ve done it for so long it’s a difficult habit to break.

If the Den series ever got adapted, I would quite like Sam Claflin run the lead as the enigmatic showman Franco Del Monaire. He’s got the perfect mix of smoulder and edge for it I reckon. Rachelle Ann Go would have to play the lead in the sequel, but she’s doing Hamilton in London so I imagine it might be tricky to get her away from that. Come on Netflix. Do the right thing and give me a call.

Less of a curve, more of a vertical line, would be the marketing aspect of it all. Social Media is a confusing battleground of opinions and rather than try and engage with each, I simply lean back and ride the flow. I have my own little space I’m content with.

I used to prefer a mixture but I’ve shifted everything to digital now. I take notes on a pad with a stylus which are uploaded onto Dropbox. That’s all synched up to the laptop. I can check the manuscript on my phone that way if I’m ever out and about. I find it more convenient to have everything at my fingers, though still manage to be terribly disorganised.

It’s hard to pick one, but I have a massive soft spot for anything Neil Gaiman has done. I’ve never read anyone else who basically performs alchemy with his words.

I have a handful really but it really does depend on the day. Today it’s Wiseguy by Nicholas Pileggi.

I either indulge in videogames, stargazing or reading. When I’m not writing I have the curious urge to be doing something else productive which can be a difficult feeling to shake.

It’s always tea for me.

Peroni is my jam, but I’m a sucker for a glass of rosé. I say glass but I’ll quite happily swig it from the bottle like a hobo.

I’m a cat fan. Always have been.

Got to be the winter. Sitting all warm and cosy while it’s snowing outside is my idea of bliss. 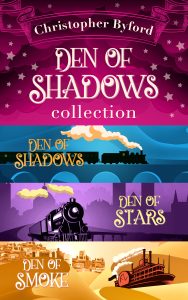 Enter a world of sin and fantasy in this collection of fantastical stories!

Welcome to the Gambler’s Den where every night is a party, and every day is a battle with the law…

While fighting off poverty in the blistering desert heat a travelling casino offers one night of solace. One chance to change your fortunes. But once on board there is more to the show than meets the eye: enter Franco, the elaborate ringleader, Wyld the stowaway thief and Misu the fire breathing showgirl.

In a kingdom ruled by the law Franco ensures his den remains in line. But when he’s faced with saving the fate of the train, and those on board, he may be forced to break his own rules. Life on the den isn’t just a job but a way of life and once you’re in you’ll never be able to leave.

The Gambler’s Den lies in ruins, its staff scattered across the Sand Sea, all but a memory of the minds of its past patrons. But when the Morning Star appears, ruled by a mysterious figure known only as the Hare, the comparisons can’t be helped. Who is this larger-than-life character? Why do the showgirls wear masks? What are they hiding? The answer…they should be dead.

Franco and Misu were safe only in their anonymity, but with Franco gone Misu must find him – jeopardising all they have built. In order to save the man she trusts Misu must put her faith in the villain.

Wilheim does not forget disobedience lightly, and Misu’s was a great betrayal, so now he will call in his debt, and his revenge on the staff of the Morning Star.

There is always someone ready to take the title villain…

Jackdaw may once have been a part of Wilheim’s gang but now he’s looking for a new life, a free life.

But will he be able to shake his past for good, or will he end up in a worse position than he was before?

Christopher Byford was born in 1980 in Wellingborough, England. He learnt to walk whilst holding onto a Golden Retriever and fondly remembers the days of BMX bikes and conker matches. He left college to suffer as an IT Manager for a small multinational before, in his words, escaping to Gloucester. After working for some large tech companies he seized the opportunity to become a full time author. It was the best thing he had ever done.

In the last few years Chris has penned various tales, the Gambler’s Den series being his most prominent.

Away from literary things, his interests include all things VW Campervans, gardening, photography, astronomy and chicken keeping.

He finds talking about himself in the third person rather pedantic and could murder a cold pint of cider right about now.

Doesn’t this series sound absolutely awesome! So, come on, get over to Amazon and get yours. http://amzn.eu/d/9QAI9Fq.