Don’t you love reading about an author’s journey to publication? I do! They’re often some of my favourite posts, so I’m really excited that Kathleen Whyman author of Wife Support System published by Hera Books, has told us more about hers in today’s guest blog post.

My Journey to publication by Kathleen Whyman

It’s my bookiversary! All together now, happy birthday to…

Sorry for getting carried away, but as you may have gathered, I’m rather excited that my debut novel, Wife Support System, has now been out for a whole year!

The launch day itself wasn’t quite the glamorous day I’d been dreaming of – my kids still wanted feeding and entertaining and my husband was too busy with back-to-back Zoom meetings to ply me with champagne and replump my cushions (that’s not a euphemism) – but it was still VERY exciting.

To mark the first anniversary, Katie’s kindly invited me to write a guest blog about how I got here. Not in a birds and bees kind of a way (judging by the looks of disgust on my kids’ faces when I explained it to them, it’s not something I should detail unless absolutely necessary), but in a writing “journey” way. One thing’s for sure, had I known how long a journey it was going to be, I’d have bought a lot of Kendal mint cake.

I started writing Wife Support System in September 2012, when my youngest daughter started school. I’d written a book when I was pregnant and on maternity leave with my oldest daughter. The book was crap, but I knew I had it in me to write a complete novel and that I loved doing it. And now I had an exciting, shiny, new idea!

The story was of four women – Erica, Jen, Polly and Louise – who were fed up with their husbands not being around much to help and leaving them to do the bulk of the childcare, running a house and life admin while working. I got the idea when my friends and I were moaning about this very issue. I even said the words Erica herself says: ‘We’ve got the balance wrong. Instead of living with our husbands and struggling to do everything by ourselves and just seeing our friends now and then, we should live together and help each other out and see our husbands now and then.’

It wasn’t a viable or financial option in reality, but the idea grew and I started imagining scenarios that would lead women to take such drastic action and what would happen when they lived together. I was confident the concept would appeal to other women and, by adding a few details to the plot and having a twist at the end, it would appeal to agents and publishers too. Writing the actual thing was surely a mere formality!

The importance of being earnest

I was lucky enough to work part time, so had two days a week at home. One of them was absorbed by boring chores, but I dedicated one day to writing and also wrote when the girls were in bed. I’m a real plotter (although I’d love to be a pantser, as it sounds much more spontaneous and cool than being the kind of person who colour codes their tea towels), so had my story mapped out and wrote with earnest.

As I wrote, the story evolved and grew. All four stories actually, as each chapter was told from the perspective of a different character. It felt as though I was writing four books.

After about three years of hard slog, I typed the words The End and naively submitted it to agents, thinking that my work was pretty much done.

I should have typed The Start, as Wife Support System was a ridiculously long way from being submission ready, let alone finished. I’d polished my first four chapters ­– one for each character – to perfection, but hadn’t edited the rest of the manuscript at all, so it was a long, sprawling mess. 180,000 words long in fact, which is 80,000 words too long for a debut novel. (Aaah!)

On the strength of the first four chapters and synopsis, several agents asked to read the full ms. The feedback was varied and often contradictory. One agent said that I should start the story with the women discussing the house share – I’d originally begun with the women living there lives and showing how much of a struggle it was. So I cut the first eight chapters and rewrote the start of the book, showing the women on holiday where Erica has the idea of the house share. The next agent I submitted to said they’d like to see more of the women’s background before they considered a house share. Eek!

One agent said that if I’d submitted it to her 10 years before, she’d have sold it for a fortune, but women’s fiction wasn’t popular at the moment. At the time the trend was for domestic noir – Gone Girl and The Girl on the Train were top of the bestseller lists. Humorous women’s fiction didn’t really feature, apart from well-established authors, such as Marian Keyes and Jane Fallon. This was really disheartening to hear. I could use constructive criticism to improve my novel, but I couldn’t do anything about the market.

One agent gave me some great advice on how to improve it and said that once I’d applied those points and given the ms “a good haircut”, she’d read it again. This renewed my motivation and I edited like crazy, being ruthless to the point where sometimes the dialogue seemed stilted and the narrative didn’t flow as naturally as I felt it should. Despite all this, I was only able to get down to 150,000 words. The agent read it again and said that much as she liked my writing and the plot, the ms still needed substantial work and she just didn’t have time to work with me on it. At this point I felt as though I’d been cut adrift from the lifeboat I was desperately hanging onto and didn’t know whether to swim on, without knowing if I was heading in the right direction – or indeed any direction – or just give up. I’d been writing for four years now and it was getting embarrassing when people asked me how I was getting on!

The thing that kept me going was the fact that the agents who had given more feedback than a standard rejection letter said they liked my writing and it was a good, original idea. I didn’t want to give up on that.

Unsure what to do next, I invested in some time with an editor at Cornerstones Literary Agency. I couldn’t afford to get the whole ms critiqued, but paid to get the first four chapters and synopsis read.

The editor, Nicola Doherty, immediately identified what I needed to do to lose the excess 50,000 words – get rid of one of the main characters. This wasn’t dissimilar to being told that you had to lose a family member. It’d feel wrong to get rid of anyone, even the ones that get on your nerves after a few drinks at Christmas.

Nicola was right though. Much as it pained me, it was the only way to give the book that much needed serious haircut. I examined all four characters and worked out which one added the least interest. It turned out to be Jen, who was most like me personality-wise. I was officially too boring to be a book character!

By taking Jen out, I had to rewrite the whole book. Things that happened in Jen’s chapters had a consequence on the story, so her essential storylines had to be given to another character. And she was often in scenes in the other women’s chapters so they had to be rewritten and Jen’s lines spoken by someone else.

Because I hadn’t had any luck with agents, I decided to change my approach and contact publishers directly instead. Some of them have open submission days, Simon & Schuster for example, and others, particularly the digital-led or digital first departments, welcome unagented manuscripts. I also joined the Romantic Novelist’s Association’s (RNA) New Writers Scheme, which offers a full critique of your manuscript as part of the membership. Wife Support System isn’t a traditional romance, but there is some romance in it, so it qualifies.

The RNA is full of warm, encouraging, motivating people. I’ve met many other authors, some of whom have become good friends, and also industry experts. One being Keshini Naidoo, publishing director and co-founder of Hera Books, who I bumped into in the toilets at the RNA’s winter gala. The glamour!

I’d spoken to Keshini before in my journalism role for Writer’s Forum magazine. She hadn’t realised I was a (hopeful) author and asked to see Wife Support System. I sent it to her the next day and a few weeks later she replied to say that she and her co-founder, Lindsey Rooney, really enjoyed it and would love to publish it!

I have no idea how many times I read that email. Somewhere between three and five thousand. To have my book published was what I’d hoped for and dreamed of for so long, but to be published by someone like Keshini, who I liked, admired and respected so much took it to the next level.

I had to do a couple more edits and, yes, more cutting to get it down to that magical 100,000 words. But with Keshini’s guidance and the knowledge that this time it was to be published, not just in the vain hope that it might be some day, it didn’t have the same soul-destroying impact as it had before.

It took seven years, numerous drafts and countless bars of chocolate (thank goodness for elasticated waistbands), but I got there in the end and Wife Support System came out as an ebook in July 2020 and in paperback and audiobook in March 2021.

I no longer need to be embarrassed when people ask me if my book’s been published. Although maybe I should be embarrassed that I’m still celebrating it! 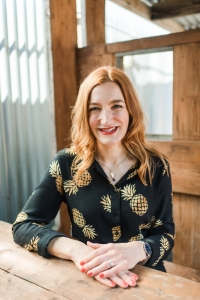 Kathleen Whyman is an author, journalist, knackered mum and Espresso Martini fan. (These may be linked.)

Kathleen’s debut novel, Wife Support System, was shortlisted for the Romantic Novelists’ Association’s Joan Hessayon award. Kathleen’s novel Second Wife Syndrome was shortlisted for the Comedy Women in Print prize in the Unpublished Comic Novel category. Although very pleased to have been nominated, Kathleen’s still gutted that both awards evenings were cancelled due to Covid. There were going to be party bags and everything!

Kathleen writes a column for Writers’ Forum and contributes to the Romantic Novelists’ Association’s magazine Romance Matters. She also wrote short stories for Jackie magazine in her teens. These were, thankfully, never printed.

Kathleen lives in Hertfordshire with her husband and two daughters. 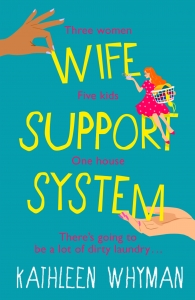 ‘We’ve got the balance all wrong. Instead of living with our partners and struggling to do everything by ourselves, we should live together.’

Erica knows her suggestion sounds extreme, but when her nanny leaves, she’s extremely desperate. Polly and Louise aren’t convinced, but after they move in together, they admit that life’s much easier when the childcare and workload is shared.

However, over time resentment builds, as they judge each other’s parenting styles and bicker over cleaning, cooking and whose turn it is to buy toilet rolls.

Can Erica, Louise and Polly keep their friendships and relationships strong, as one has her head turned by a handsome colleague, one resorts to spying on her husband and one fights to keep a dark secret? Or will their perfect mumtopia fall apart?

Wife support System by Kathleen Whyman is available in paperback, ebook and audiobook.