Today on the blog I’ve got a brilliant blog post by the even more brilliant Sandy Barker author of The Christmas Swap and One Summer in Santorini. Here she’s talking about writing international characters and there’s some juicy advice here!

When I was growing up, my grandmother on my dad’s side – the English side of the family – called me and my sister ‘Oz Merry Poms’. That’s because we were 1/2-English, 1/2-American and born in Australia.

Now, firmly in middle age, I have called all 3 countries home, having lived in the US and the UK, as well as in 3 cities in Australia. The adventurous spirit that my parents instilled in me – taking us on our first international trip when I was only 7 – has stuck. I’ve lived abroad for around 1/3 of my life, and when I can, I travel – I get antsy if I stay still too long.

Like me, my characters are travellers, they often live aboard, and they meet likeminded people from across the world. I thought it would be interesting to deconstruct how I write international characters – the strategies I use to make them authentic and the challenges I sometimes bump into.

Long before I started writing, I would study other people – not in a weird, creepy way, but with fascination. When we travel somewhere new or I meet new people, I am enthralled by personalities, by the gait of someone’s walk, how they lounge or fidget, or how act when they’re excited, nervous, annoyed, or furious. Those are nuggets for strong characterisation.

In particular, I love accents, local lingo, the sounds of other languages. I love vernacular and how those seemingly tiny differences from region to region can really bring a character to life. When I send across my novels, I’ll include style sheet that specifies how different characters say the same thing. If they want someone to ‘wait’, do they say, ‘hold on’ or ‘hang on’ or ‘hang about’ or ‘hold up’?

There are reasons we connect with people from other places – and often quickly, forming complex friendships in a brief amount of time. And those reasons have more to do with our similarities than the small differences that make us unique. An international character can only be rich and real to readers if they are fully-formed – they have doubts, fears, and annoyances, they long for love and acceptance, and they have dreams that may have been stifled or stymied.

George R.R. Martin was (famously) asked how he wrote such complex and believable female characters. His response? ‘You know I’ve always considered women to be people.’ Exactly right! All characters share the innate traits that connect us as people, no matter where they’re from, so those must come to light.

I’m on record as being a shameless theft of other people’s stories, particularly juicy anecdotes, and putting them into my books. But what I’m also shameless about is basing characters on people I’ve met while travelling.

But even so, even if a character is from a place I’ve been to or lived in, or is based on someone I know, when it comes to getting the regional aspects of that character right, research is key. Often that can be desktop research, but I also have friends and family across the world, and I bug ask them for their help – both in the writing stages and in the editing.

‘Does this sound English enough?’ I’ll ask my sister, who has lived in the UK for 20+ years.

I asked my Scottish author friend, Nina Kaye, to read through the Edinburgh section of my 6th book (Under Bali Skies), even though I’ve been there and had done my desktop research. Her feedback will make that section authentic, particularly when it comes to the characters – their personalities, the things they say, even their names.

My brother-in-law is fluent in French and Italian, so was my first editor for those languages in That Night in Paris. ‘Technically, this is correct French, but he wouldn’t say it like that – he’d say it like this.’ So helpful! By the way, the copy editor my publisher hired for that book – a specialist in European languages – had zero edits for the French and Italian. Huzzah!

Sometimes, I’ll get it wrong – or a reader thinks I have.

In my first book, an American character says, ‘Don’t poke your tongue out at me.’ A reader noted in her review that an American would say ‘stick your tongue out’, not ‘poke’. I walked into the other room, where my American partner was – the one who my character was based on – and said, ‘What am I doing now?’ then poked out my tongue. ‘Poking your tongue out.’ Right! I felt vindicated, but still, for that reader, it pulled her out of the story.

And did you know that no one in the entire country in America even knows what Christmas cake is? I didn’t when I wrote The Christmas Swap. I only discovered it when a reader called it out in a review. 😉

I did, however, hear from a Texan woman this past week. She’s reading One Summer in Santorini as she’s about to travel there. She’s loving the book, but she particularly like the exchange my main character has with a Texan man on the small plane to the island. ‘Texans are so polite,’ my character concludes. ‘As a polite Texan, I had to thank you …’ the reader’s messaged began. That one line really resonated with her – and I know that Texans are polite as I lived there for 2 years! Their (southern) manners are impeccable and it was a fun way to layer that scene through a simple exchange.

So, no matter how authentic you are, how much research – personal and desktop – you do to make your international characters really sing, there will always be readers who are pulled out of the story by your choices. That said, most readers will simply enjoy the read and some will really feel seen.

Thank you so much, Sandy! Anyone else made some notes after reading that? 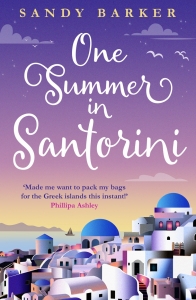 If you liked that, make sure you check out Sandy’s new book The Dating Game coming soon! And until then, you can always grab One Summer in Santorini!

Sandy is a writer, traveler and hopeful romantic with a lengthy bucket list, and many of her travel adventures have found homes in her novels. She’s also an avid reader, a film buff, a wine lover and a coffee snob. She lives in Melbourne Australia with her partner, Ben, who she met while traveling in Greece. Their real-life love story inspired Sandy’s debut novel One Summer in Santorini, the first in the Holiday Romance series with One More Chapter, an imprint of HarperCollins. The Christmas Swap, Sandy’s fourth novel is a stand-alone and celebrates her favourite time of year. Coming soon are a stand-alone romcom set in the world of reality television, the next book in the Holiday Romance series, and another Christmas story!

Photo by Carolyn V on Unsplash