I’m really excited to be hosting the amazing Belinda Missen on the blog today. Not only is she an amazing writer but she’s also one of the nicest people I’ll ever met!

So without further ado, Hi Belinda! So my readers get to know you, can you tell me a bit about you and your latest work.

So, An Impossible Thing Called Love was originally released as a self-published book called Red. I adore the character of Red (William), and am thrilled that he’s now got a substantially larger audience. The blurb is as follows:

When globe-trotting Emmy first fell for first-aider William on a freezing New Year’s Eve, she really believed that their love would go the distance.

But when she returns to Australia, her letters start to go unanswered and her emails bounce back unread, Emmy decides it’s time to pick up the pieces of her broken heart and start afresh in London.

So she’s shocked when William walks in on her very first day at her new job! Even worse, he’s hotter than ever. But why did he disappear for so long? What has he been hiding? And could this really be their second chance at falling in love…?

Good question! This was how I ended up at HQDigitalUK in the first place. While I can’t find the exact pitch, I’m sure it would have gone something like this:

When red-head William meets globetrotting Emmy, it’s love at first sight – but will time be on their side?

A bit of both. The more I get into these books, and especially working with an editor, the more I need to plan. My latest draft fell apart spectacularly – even with a plan – but I hate to imagine what it would look like without one!

Being content and happy in my job, which I am. I’m doing what twelve-year-old me always dreamed about. Now, if I could just make it financially viable 😉

I look on my bookshelf a lot and amalgamate names. Emmy Sumner (An Impossible Thing) got her surname because the first book I saw when I looked up was a biography on Sting.

God no. I couldn’t deal with the negative stuff. I barely make it to looking at reviews. I usually have friends screen them first.

I’m a big napper. I find that going for a nap just clears out the fog. Also, driving is great for that, too. Get out into the world and interact. Some of the best ideas come that way.

Hmmm. Twelve months ago, I would have said six weeks. The last few, however, I’ve found really difficult. They’ve been rewrites of self-pubbed stuff, characters I’ve loved for years. For that reason, I’m having trouble breaking out of their original stories and looking at things from a completely different angle.

Easiest: the daydreaming. My characters really have the best, most fun lives.

Hardest: Translating those daydreams into viable, breathable words and people.

I will go out on a limb and say: put Benedict Cumberbatch in everything. I would be more than happy to see him as an Oliver Murray (A Recipe for Disaster). I may or may not have had him in mind when describing the physicality of the character annnnyway. So, you know, if his production company wanted to option it, he could star in it . . . Bryan Adams could do the soundtrack. I don’t want for much in this life 😉

These past twelve months working with a publisher have been a massive eye-opener. I’m working harder than ever. The results are much better, but the weight can get quite heavy at times.

I used to be solely a computer person. I’d write the book in chronological author and be done.

For book three (Lessons in Love), I’ve returned to pen and paper, and I’ve been really pleased with the results. I’ve found the act of writing easier (perhaps less screen time/internet disturbance), and I can self-edit as I translate to a Word document.

Mhairi and Lindsey I love because of their dry wit and romance that is perfectly natural and not over the top syrupy. It’s what I aim for when I write.

Edward St Aubyn I love because he’s so brutally honest with the world around him. The Patrick Melrose novels are at once heart-breaking and hilarious.

However, I wouldn’t be here today without . . .

Jurassic Park – Michael Crichton. As an eleven/twelve-year-old girl I was obsessed with Spielberg’s Jurassic Park, and convinced I was going to marry Sam Neill (who wouldn’t be?). It was after reading the book that I started with what I would later come to realise was fan-fiction. I do still dabble in fan-fiction. It’s a great way to gauge audience reaction to characters.

Having said that, I’m now thirty-six, and am avoiding a re-read of JP – I don’t want to read it as an adult and find that I’m let down by it, so I’ll leave it as a very fond memory.

I knit, I bake, I read, I annoy the hell out of my husband.

Wine – I sometimes can’t stomach the smell of beer. 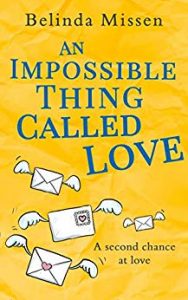 When globe-trotting Emmy first fell for first-aider William on a freezing New Year’s Eve, she really believed that their love would go the distance.

But when she returns to Australia, her letters start to go unanswered and her emails bounce back unread, Emmy decides it’s time to pick up the pieces of her broken heart and start afresh in London.

So she’s shocked when William walks in on her very first day at her new job! Even worse, he’s hotter than ever. But why did he disappear for so long? What has he been hiding? And could this really be their second chance at falling in love…?

Author and sometimes foodie, Belinda is a ridiculous romantic who met her husband after being set up by a friend two states away. It went so well, they were living together shortly after their first date.

Residing in country Victoria, surrounded by books, cat-fur, and half-eaten cake, Belinda divides her days between writing rom-coms, baking, and indulging her love of comic books.

Haven’t got your copy? Never fear, it’s digital, so there are no printing issues of which we can speak . . .

Thanks Belinda! Isn’t she just the sweetest? So come on, you know want your copy!